I love sports memorabilia and the profiles in history of all the great athletes. My friend George Alexander Shapell and I went for a short junket to, of all places, Milwaukee last week, and discovered something amazing. Although the city itself only supports two professional sports franchises and only two championship titles, (the Milwaukee Braves won the 1957 World Series and the Milwaukee Bucks took the NBA championship title in 1971) it would be hard to find a more committed city to sports and sports history.

Fans in Milwaukee, Shapell and I found out, absolutely adore their sports heroes. Here is a list, with short profiles of their history.

•    Henry Aaron: Hank Aaron played for the Braves from 1954-1965 and the Brewers from 1975 until 1976. It is well-known the “Hammerin’ Hank is the one bone fide home run king, and also one of the most well-loved athletes who called Milwaukee home.

•    Ray Allen: Allen was a Buck from 1996 until 2003 when he was shipped off to the Seattle to play for the Sonics. That move resulted in the loss of many loyal Bucks fans.

•    Eddie Mathews: This beloved player was a member of the great 1957 World Series team. Mathews played for the Braves from 1953 until 1965, thirteen of his 17-year career in baseball. In 1978 Mathews was elected to the National Baseball Hall of Fame. Many consider him to be one of the best third baseman to have ever played, and he finished his career with 512 home runs. 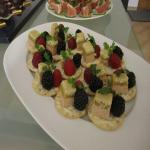 When we take our annual break we don’t budget.  We figure we work hard all year round (well, Daniel does) and so we deserve to relax in style.  With that mindset, tonight we’re off to L‘Aromate for what we heard is a real fine dining experience.  I checked it out online and it looks amazing.  The food really looks like a work of art and it has a great reputation for having an extremely talented owner-chef.
Daniel is going to try the Pigeon du Lauragais rôti à la sarriette et foie gras de canard grillé.  I know that he loves foie gras and hardly ever gets it so I’m sure he’ll love this dish. I don’t know what I’m going to have for my main but I definitely want to try the chocolat noir guanaja Dans un tube craquant, noisettes caramélisées, crème glacée au café grillé, émulsion vanillée.  Not quite sure what it all means but there’s chocolate, caramelized nuts, cream, coffee and vanilla flavors so really, what could be bad? Sometimes I think it’s good not knowing exactly what you’re getting – it takes the predictability out of life.  Anyway the fact that this restaurant has great reviews and the setting is said to be intimate is enough to make me salivate… 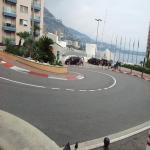 Finally the summer is here.  Well, it has been warm for a while but the kids are on vacation and so is Daniel and that’s what summer means to me – a break from life for six weeks.  This year we rented a beautiful house in Nice, South of France, which has its own pool.  The price was so reasonable and since I love to swim we just couldn’t resist.  What’s been great about it is that Daniel and I can really relax while the kids just hang out by the pool, and I’ll have had time to get my morning laps in.   It’s so nice to have 6 weeks in a place like this, away from work and let the kids really feel like they’re having a vacation too. And, the service we rented the place from offers responsible babysitters too.

One of the things Daniel and I have been looking forward to doing – ever since we booked this trip – is going to the casino in Monaco (that’s his wish!) and while we’re there, it just so happens that Point Art Exhibition is taking place.  In fact, that was how Daniel sold the idea of Monaco to me in the first place!  So we’re booked to go on August 3rd.

The Salon Point Monaco is hosting some really amazing galleries such as: De Bartha Gallery (a personal favorite of mine), Beck and Eggeling and Phoenix Ancient Art.    It’s so exciting as this is one of the major art-dedicated events of the year.  And being at the Sporting d’Hiver is just such an apt place.  Ancient art is something I’ve always found interesting – since my days as an Art History student – but never really owned.  Who knows?  Maybe this year I’ll pick something up from Phoenix Ancient Art…depending on how much Daniel makes at the casino!

Either way our vacation is just wonderful so far…and I’m just glad we got to come to the South of France – a real dream of mine for many years.

Since I’ve never really done anything meaningful for July 4th, a few months ago I began looking into possibilities to actually memorialize those soldiers who died for our country this time. Daniel suggested I try to combine this with something in the realm of exercise, knowing how much I love to swim and run.  When I learned about what was going on in Atlanta I jumped at the chance!   A 10 kilometer run was organized there in memory and respect for July 4th and at the same time, to raise money for Parkinson’s disease through the National Parkinson Foundation.  In addition, this project gave me a great excuse to have to leave the house every night at 6 (dinner-bath-bedtime) as I had to “train” for the event!

For the longest time we’d been meaning to make a trip to Georgia since much of Daniel’s family is there but for one reason or another, it’s never happened…until now. The race is expected to attract a staggering 60,000 individuals, all running with July 4th in mind while trying to make a difference for those living with Parkinson’s.  Also being memorialized at the event is the 150th anniversary of the second day of the Battle of Gettysburg, remembering Henry Zim who died there.

One particular individual to have survived the bloodbath at Gettysburg was Private Ellis Strouss.  Shortly after the battle he wrote a letter on July 6, 1863, to his mother (in the archives of the Shapell Manuscript Foundation) assuring her of his safety.  He told her he was confident that his army would be able to:  “whip Lee’s Army so that he will not be fit to do anything more for some time to come.”  People running in Atlanta on 4th July for Parkinson’s are also doing so in memory of Henry Zim, who didn’t share the same fortune as Strouss.  He died that day and today has a memorial in front of St. James Methodist Church, Greene Street.  There were 23 other members of this church who suffered the same fate but Zim was remembered specifically “for kind attention to his mothers and sisters.”

Truthfully what can be more apt for me therefore – on so many levels – than participating in this event?  Let’s just hope my training pays off and I don’t come in last, as despite wanting to do the race for the importance behind it, my ego still has a lot to say!