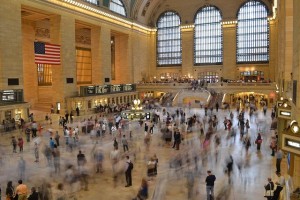 I always knew that Portland was a great place to live, offering a high standard. But now that has just been proved – yet again I should say. In a survey conducted of the country’s 30 largest cities, Portland (along with Austin, TX), has “the highest proportion of workers who don’t commute at all.”

The study was put together by Director of the University of Michigan’s Transportation Research Institute, Michal Sivak.

Commuting can be so stressful. I remember back in the days I lived in the upper west side in New York and the commute I made to Patterson. It was awful. By Friday I was just exhausted. I had no energy to go out and all I did over the weekend was recharge myself for the next week! Talk about feeling like being part of the rat race!

Since moving to Portland, I have totally given that up. As has Daniel. Occasionally we meet clients for meetings (maybe at a local coffee shop or in the park) but that’s about as far as it goes. No commuting definitely makes for a more peaceful way of life.