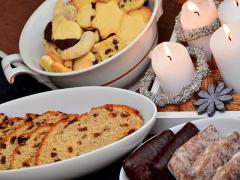 It was nice to read about our community today in the paper.  I learned that there has been a lot of goodwill and charity over the last year in my city.  Indeed, of special note has been the work of the Portland Community Fund which distributed many items of food and gifts over the Christmas season.  In addition, those families who cannot afford them, received delicious Christmas dinners.

So it’s nice.  It’s just another thing that makes me happy about living in Portland.  I also heard that kids from the Portland School District have been receiving much-needed assistance. One of Jayden’s pre-school friends has a sister in that school and I know first-hand how much the family needs help. Everyone’s really been pitching in throughout the city; from churches to local residents; businesses to other schools and food banks; it’s great how the community is rallying around.  Jayden even donated a few of his toys to the cause; I don’t like him to always feel bad for others; but at the same time it’s important he has some awareness of the poverty that exists amongst his peers so I often try to strike up the right balance and I think through the work of the fund, I’ve managed to do just that.